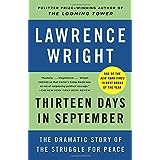 One of my negotiation study groups is covering “13 Days in September” by Lawrence Wright.

For those of you who missed the last meeting, you missed an excellent history lesson from Ron. He knows more about the Middle East than I will ever know.

We finished reviewing the Prologue with its introductory profile of three men with amazing backgrounds confronting a historic setting.

This is the backdrop, the prequel to Camp David.

Sadat makes the first bold move by physically going to the turf of his enemy in recent wars, in an apparent gesture of peace, and then confuses the situation by making a very positional and aggressive speech to the Knesset.

We then see a series of negative reactions, one by the party who was not invited to the party: the PLO.

Israel attempts to improve its BATNA, while drawing the ire of the international community, by increasing settlements in the occupied territories.

Begin proposes “the autonomy plan”, another positional move, and Carter declares himself publicly opposed to it, an odd move for a mediator.

There was some discussion on whether or not Carter is actually anti-Semitic.

Sadat comes across as somewhat delusional.

Begin comes across as paranoid – but who wouldn’t be had they walked in his shoes?

“All three men saw themselves as living exemplars of prophetic tradition.”

Isn’t it interesting how often people come to negotiations under the worst of circumstances and in a pique of pessimism and come away with an agreement?

This was no exception.